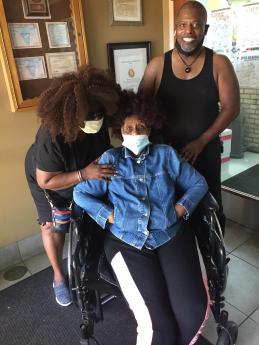 My Walk Thru the Valley of the Shadow of Death

To sum it up in three words: IT WAS ROUGH!!! But let me tell you about it.

I was feeling really bad in March this year, but honestly, I was feeling bad before that. Thanksgiving and Christmas, I could barely move, but I pushed myself.

By April, I was delirious with fever and fear. I began to pray. I called on God and my dear Mother. I knew exactly what George Floyd was feeling when he called his mother, because weeks prior I was pleading for mine.  Then, to realize this was the first time in my entire life that I felt both ill and helplessly afraid and she wasn’t there to make it and me better, was another level of despair. I thought to myself... in first and second person “Are you dying? Am I dying?”

I was horrifically weak and each one of my muscles was burning like a furnace. It was the feeling you get after a strenuous work out and your muscles burn for days trying to recuperate. This burning has lasted for months. It dissipates for a bit then suddenly reappears even now.  My husband, Paxton, cooked my favorite, some cabbage and corned bread. I tasted a sip of the broth which was absolutely delicious, but I could not eat it. In fact, it reminded me of the time I was going through chemotherapy and my mother or grandmother would fix me something to eat and the mere smell of it made me sick and I could not eat anything.

By Monday morning I was able to get dressed with assistance from my husband.  He turned on the shower and made sure I was able to reach the bar. I was literally holding on for life. I could feel my knees buckle and my thighs caving. When I got to dialysis treatment my temperature was taken. My temp was a 100.9. Everything stopped for a second, then everything and everyone was in fast motion. The nurse who took my temperature, had a cast on, and she hollered as she hopped up and hobbled from the table. “She has a fever!” Somebody else yelled “Who!!” “Ms. Bonnie!!!”  People started backing up away from me! It’s funny now, but It wasn’t then... The boss of the clinic made a few calls and was about to call for some type of transportation to get me away from there, but we all thanked God in unison when my husband returned.

We were instructed to Griffith, Indiana for me to be tested immediately. That test, that test, Oh My God! I’m squinting and squirming as I reflect back on it. They go so far up your nasal cavity they must tap your brain...WHEW!!! The nurses that performed the test were very nice, so compassionate. I truly appreciated them and their chair side manner in the tent. The next day I was to go to the quarantined dialysis center in Portage, Indiana. I was the fourth patient in that center during the beginning of the pandemic. The next day would be my first dialysis treatment in Portage. I happened to already know one of the nurses from formerly working at my regular clinic, but I didn’t recognize her until she spoke to me. In fact, no one was recognizable, they each looked like an astronaut or an alien on a mission. They had on protective gear from head to toe. Some of them had their heads covered with the light blue surgical bonnets or caps while others had colorful snug protective caps and clear plastic face shields over their masks secured by the attached visor. They wore their disposable gowns as usual however some of them also wore the protective hospital shoe coverings. Two days later I returned to Portage for my second quarantined treatment. Once I was checked in, seated, cannulated and as comfortable as expected considering the circumstances, the managing nurse disclosed the gloomy results of my coronavirus test. Yes, I had tested positive.  I would be retested in about two weeks, I would continue treatment at that location as long as I remained positive. Three weeks later, after still testing positive in Griffith, the testing site was moved to the Portage clinic.  No tent- just the back of the building almost like an alley. I was being tested so much, we had a ritual. I had music on, music helps me through almost everything.  My husband Paxton had it turned up so we could hear it outside of the car with the windows down. One handed me the Kleenex, held my hand and the test tube while the other performed the test and I took a deep breath, tilted my head back and gave the okay. About a month and four tests later, I finally had two negative results (no detection). Now, I could go back to the regular clinic. By this time, I’m leaving thirteen covid19 patients behind. A few were seriously ill. When they moaned, I prayed.

Not long after that, three more people I knew had passed away. This thing was throwing knockout punches faster than Muhammad Ali and Joe Louis put together!.  Once you feel strong enough to get up off your knees from a gut-wrenching punch, here comes another blow by blow to the heart. I know too many who didn’t make it, but I am one who did.

Although, I have tested negative, some days the severe burning returns all through my body. My brother Scotty, who also recovered from COVID 19, had reoccurring intense chills out of nowhere and he was short of breath, so they retested him and he was still negative. My husband, Paxton, has frequent dizzy spells and headaches, but refuses to be retested.

Paxton, Scotty, and I, began to recognize the difference in our mental recollections. COVID 19 had not only affected our motor skills but it had put a delay in our mindset. It had caused issues with our memories.

Be safe and practice the three Ws; wear your mask, wash your hands and watch your distance.

This COVID thing is not a hoax and it’s certainly no joke.